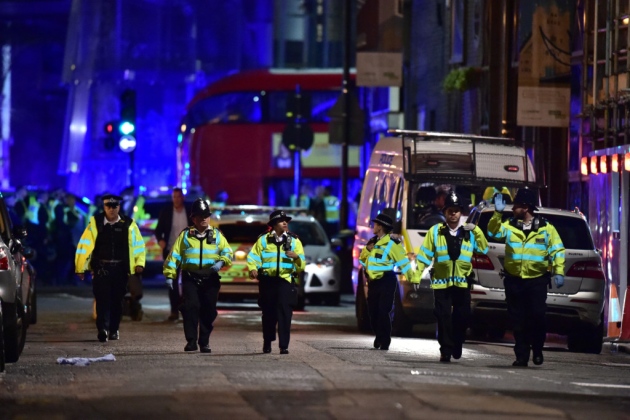 With his business based in an office in Borough, your author cannot but record shock, horror and anger at the blow that was struck there at the heart of the local community by Islamist extremists in the attack last Saturday evening that left so many people dead and injured.

For those who don’t know the area, it is a vibrant, happening place. Borough Market has become a global destination as a foodies’ paradise, with market stalls selling the finest foods from around the world, scattered with a generous number and extremely wide variety of cafes, restaurants and bars. It’s a true success story of how a dilapidated area of London has seen its economic fortunes turned around in recent years, with once redundant industrial buildings refurbished and reoccupied by thriving medium sized businesses and the imaginative start-ups that are the future drivers of the capital city’s economy.

The community, residential, visiting and working, is as cosmopolitan as London can possibly be, with every race, religion and age-group rubbing along just fine in a place that can have a constant party atmosphere.

We cannot know precisely what was in the minds of the three attackers when they set about deploying their large van as a weapon of mass destruction from which they then emerged wielding blades with which to murder people in savage and brutal attacks. But the bizarre twist of the attackers wearing fake bomb vests suggests a level of delusion that exceeds even that of the perpetrators of previous incidents. Was it to make them feel like real bombers; was it to ensure they were shot by the police and hence martyred; or was it to strike even deeper fear into the hearts and minds of those whom they were attacking?

That the national general election campaigns were suspended was absolutely right and proper. This was not pandering to the terrorists, as Paul Nuttall, the Leader of Ukip would have us believe as he alone broke ranks nationally to campaign. On the contrary, it was a mark of respect for the victims of the attack. That the general election itself went ahead was absolutely the right response to those who would deny us the basic democratic freedom to go peacefully and safely about our business.

At the time this article went to press, the outcome of the general election was not known, but whoever the incoming Prime Minister is, they will have to face up to the fact that anybody who can hire a van and pick up a few kitchen knives has the potential to be a mass murderer. That is the soft underside of democracy: with freedom of movement and association, comes the ability to attack the heart of the society that protects those freedoms.

There will need to be a tougher approach, but that must not be just in rhetoric, it will need political courage and commitment to ensure that our law enforcement agencies have the resources and the powers that they need; and that they have the support of a strong government and the wider community to use those powers and resources even if it means putting a few noses out of joint in the liberal-minded media.

What we absolutely don’t need, is fools like Paul Nuttall inflaming passions as he did very recently by calling for the reintroduction of the death penalty and offering, distastefully, to serve as the executioner himself if no other volunteer were to be found. In just what way would the death penalty deter those who are bent on suicide as the outcome of their crime? Does Mr Nuttall actually stop and think what public relations’ capital Isis/Daesh and other purveyors of death and hate would make from the British State carrying out the death penalty on one of their supporters?

The former Liberal Democrat Peer, Lord [Alex] Carlile, who served for many years as the Government’s independent reviewer of terrorism legislation, recently urged caution as the response for any more powers to be given by new laws, arguing instead that the current laws provide the powers the police and other agencies need, but that they need to be more effectively deployed. The latest legislation was only enacted last year, and there is little to suggest that the law is a weak link in the armour protecting public safety. All the killings we have seen are clearly offences under existing law, conspiring with others in advance to commit such attacks is a serious offence, as is encouraging their perpetration.

The real challenge is to identify where radicalisation is taking place, by whom, and of whom; and to stamp on it hard. The internet must now be seen as one of the front lines in our civilisation’s battle against terrorism; and in this the internet providers should continue to be cooperative in taking down, as they have been doing in their thousands, sites that promote radicalisation and terrorism. The online world is certainly drinking in the last chance saloon if it thinks the public will baulk at prosecutions for complicity in terrorism for those providers who turn a blind to what is happening on their servers.

There is also a rigorous debate to be had about whether more of our police should be visibly armed. This might help deter attackers at high visibility locations, but it might attract them in equal numbers as they seek the perverse glamour of suicide by police shooting. There is further need to invest in more officers, particularly on the intelligence side of policing, and there will clearly, in the light of the Manchester atrocity, need to be a review of safety at major events. These developments may limit our freedoms a little, but that is a small price to pay collectively for greater security if the combination of increased resources, better intelligence, a determination to drive out radicalisation, and enhanced physical security can be shown to save innocent lives.

This afrticle first appeared in The Catholic Universe of Friday 9th June.