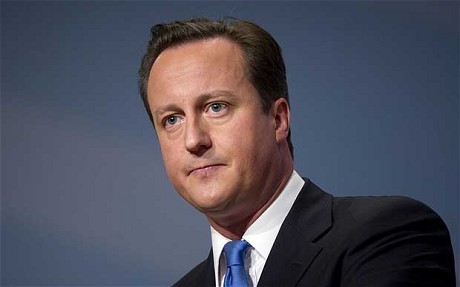 Cameron agrees: economy of Brexit Britain would be strong

“The argument isn’t whether Britain could survive outside the EU. Of course it could."

Those clear and confident words are not those of the leaders of the “Vote Leave” campaign. They are the words, no less, of David Cameron, our Prime Minister and the leading champion of the “Remain” campaign.

Speaking last November, to the Confederation of British Industry, he went on to say “Some people seem to say that really Britain couldn’t survive, couldn’t do okay outside the European Union. I don’t think that is true. Let’s be frank, Britain is an amazing country. We’ve got the fifth biggest economy in the world. We’re a top ten manufacturer. We’ve got incredibly strong financial services. The world wants to come and do business here. Look at the record of inward investment. Look at the leaders beating the path to our door to come and see what’s happening with this great country’s economy. The argument isn’t whether Britain could survive outside the EU. Of course it could.”

Those clear and confident rebuttals of the economic doom-mongers are in marked contrast to the “Project Fear” messaging otherwise emerging relentlessly from Government and all the main political parties, but this was no random outburst or off the cuff comment. David Cameron was again asked, specifically, for clarification of his views during the G7 Summit in May this year. Asked about his previous claims that the UK could "thrive" outside the EU, the Prime Minister was adamant saying: "I withdraw absolutely nothing I've previously said. Britain is an amazing country. We can find our way whatever the British people choose.”

But it’s not only on the fundamental economic issues that the Government appears to be issuing completely contradictory messages. It remains British Government’s policy to support Turkey’s application to join the European Union. That is a position that David Cameron has personally backed and promoted over many years, even though he’s now trying to convince the electorate that it will never happen.

Fears are now growing rapidly among the EU referendum’s voters about the promise of the EU elite, without the authority of the people of Europe, to offer free travel within the European Union to 75 million people from Turkey as part of an ineffective deal that Turkey would help reduce the flood of refugees into Europe from Syria. That move has focussed voters’ attention much more on the prospect of greater immigration into the EU and into this country, from places which don’t share our democratic values or our cultural traditions.

So, rumours are now speculating in Westminster that David Cameron might yet announce a “referendum lock”, promising another referendum on whether EU membership should be granted to Turkey should that become a serious possibility. Such a last minute pledge risks looking politically cheap, lightweight and disingenuous because no Prime Minister could bind his successor in that way, nor could Parliament itself.

Indeed, by allowing the rumour to circulate and gain credence, the Remain campaign have lost control of the agenda and risk moving dramatically up the political agenda the perceived threat of Turkish membership and free EU travel for its citizens. This will be ruthlessly exploited by Nigel Farage in particular and by others speaking for Vote Leave to play once again their joker card of fear of mass immigration and the burdens it undoubtedly places on local services and upon the cohesion of communities.

As the Living Wage rises in the UK to levels which are several times average earnings in some other countries, particularly those in the eastern part of Europe, that, too, will draw ever more people who want to live and work in this country. The prospect of that huge draw being extended to everyone in Turkey is quite understandably a fear for many voters.

It is frankly inadequate for the Remain campaign to pretend that these are not huge issues that are of valid concern. Rather than deny the problem and the challenges our society faces in the context of securing a successful outcome to their Europhilic campaign, it would be more practical and more productive for the party leaders to be setting out precisely how they would control immigration. That’s what the Vote Leave campaign has done in its endorsement of the Australian, points-based immigration assessment scheme. Such a scheme would also enable us as a country to end our discrimination against applicants from Commonwealth countries.

This column has been consistent for years. It welcomes the contribution that people coming from overseas make to our economy and the richness of our culture, and to taking the lowest paid jobs in our public services and so keeping them going. But even your author baulks at the prospect of opening our doors and laying down a welcome mat to the entire population of Turkey.

It is going to prove a long-term problem for the credibility of and confidence in our political system that the EU referendum debate has sunk to the lowest common denominator of immigration, but frankly, for many people it has, and that has substantially improved the chances of those who wish to see us leave the European Union.

With the sight of the senior echelons of the Conservative Party at war with each other, assassinating each other’s characters and dismissing each other’s comments as lies, that Party faces a post-referendum rupture that could reshape the centre and right of British politics for decades to come. That chance will be greatly increased if there is a narrow margin for “Remain”. Europceptics, whose ranks include the majority of Conservative Party activists at local level, will feel cheated and betrayed by David Cameron’s “renegotiation” that wasn’t, and his subsequent campaign to persuade the nation to stay within the EU.

The Labour Party is also finding on the doorstep that many of its core voters outside London and the South East are ignoring the advice of its Leadership and are planning either to abstain or to Vote Leave. There is a whiff of panic in the Westminster air and troubled waters lie ahead for both major parties.

This article first appeared in The Catholic Universe of 17th June 2016.