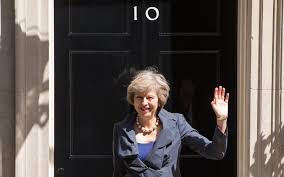 New PM Theresa May is a steady hand on the tiller whilst Labour are a disgrace.

We have seen our previous Prime Minister, David Cameron, leave office having failed completely in his mission to keep the United Kingdom in Europe. We have a new Prime Minister, Theresa May, whose accession to that position was accelerated from the 9 weeks of an expected leadership election, to just a few days.

Mrs May’s already left no doubt in anybody’s mind, through her own comments and through the appointment of her Cabinet, that “Brexit means Brexit”. For better or for worse, the United Kingdom is on track to leave the European Union.

Boris Johnson, brought promptly back from the political dead, is now Foreign Secretary. His co-campaigners for Brexit, Dr Liam Fox and David Davis, take the posts, of International Trade Secretary and Secretary of State for Brexit respectively, Government structures are being remodelled to provide the civil service resources to clarify our objectives, shape the negotiations, and deliver the post-Brexit plan to maximise the undoubted opportunities that will be created and to minimise the threats that are real. These are exciting political times.

Michael Gove, despite a ground-breaking record as Secretary of State for Education and then as Justice Secretary, is sacked for his political ambush of Boris Johnson. Gone too is George Osborne, the Chancellor who sought to terrify the nation, as this column warned, with threats of an Emergency Brexit Budget, cuts to pensions and increases in taxes for hard working families.

Our new Chancellor, Philip Hammond, has made it clear that no such Emergency Budget is necessary, and it will be business as usual with the next announcements in the Autumn Statement.

America, the greatest democracy in the world that has bizarrely left itself the poor choice of either Hilary Clinton or Donald Trump as next President, has seen racial violence and Islamist attacks that risk shifting the centre of its politics firmly to the right. Brace yourselves readers, Donald Trump could be a serious prospect for the next President with all that his rather odd policies augur.

The Middle East slaughter continues, as do Islamist atrocities in Bangladesh and Africa.

France has been the victim of a most vile attack, one of the worst we have yet seen, with nearly a hundred dead and many hundreds of others suffering appalling injuries as a self-designated Islamist assassin drove his truck, using it as a weapon of mass destruction against so many innocent men, women and children, through a crowd gathered together, ironically, to celebrate “liberty, equality and fraternity”, whilst shooting indiscriminately into the crowd to boost the death toll still further.

Nearly 300 people have died in Turkey, with 3,000 soldiers arrested after an attempted coup to unseat its President Erdogan, and plans are already in place to restore retrospectively the death penalty that the country abolished in 2004 so that the guilty participants can pay the ultimate price for their treason. Some 2,745 judges have also been dismissed in the wake of the coup, state media say, suggesting the opportunity is being taken to bring the judicial system to heel and under the control of the President. The supporters of a Muslim cleric, Fethullah Gulen, are alleged to have been behind the coup. The extradition of Gulen from America, where he lives in exile, is being sought.

As this column has warned previously, President Erdogan was already undermining human rights, the freedom of the press and freedom of religion. He will now have an excuse to take this clamp down further and faster than would otherwise have been the case. Turkey could be heading away from the liberal democracy it had once sought to become, promoting its then aspiration to join the European Union and already promised free access to the EU for its 75 million citizens. Instead, it could become an openly Islamist state.

Russia continues to occupy Crimea, NATO troops are on manoeuvres in the Baltic nations to give their people confidence that the Alliance will defend them if Russia moved against them, and things are restless in the South China Seas where two of the world’s superpowers, America and China, along with other nations, are jostling for control of hundreds of Islands of strategic importance.

The British are a stoic people who are not easily panicked. We are protected to some extent, as we have been historically, by the fact that we are an island, but we cannot be complacent in these troubled and challenging times.

Now would not be a wise time to let down our guard in terms of our national security in response either to economic pressures or to the conclusions of the Chilcot Report into the Iraq War, and which this column last week identified as having found Tony Blair “Not Guilty” of the principal charge that in 2003 he took the nation to war by knowingly misleading Parliament and the people about the status of Sadam Hussein’s weapons of mass destruction.

British policy, post the Brexit referendum, is becoming clear already under Theresa May’s Premiership. Trident will be renewed, as Parliament endorsed earlier this week, to provide the ultimate deterrent against those who would attack us. New aircraft carriers will be built to enable our nation to project its force wherever it is needed around the world. Our armed forces will be given the equipment they need to meet effectively the changing nature of conflict in different regions.

Our trade policy will be outward looking to the other Anglophone countries: Australia, New Zealand, America, and Canada; and to the countries of the Commonwealth, including India, with which we have such powerful cultural and historic ties; and we will build on our trading relations with China.

It is a relief that we have so swiftly and calmly replaced one Government with another that includes so many experienced and senior players. We need their steady hands on the tiller as we plough through some of the stormiest waters since the Second World War. We all need to hope that Theresa May’s Premiership is distinguished by its competence and its effectiveness.

On the other side of the House of Commons we see the shambles that is the alternative: a Jeremy Corbyn Labour Party in the throes of melt-down and civil war, fighting its internal battles over ideologies that should have been left behind in the 1970s and 1980s where they were equally unwelcome and from which many had hoped that Labour had moved on. That party is currently a disgrace to democracy.

This article first appeared in The Catholic Universe of 22nd July 2016.