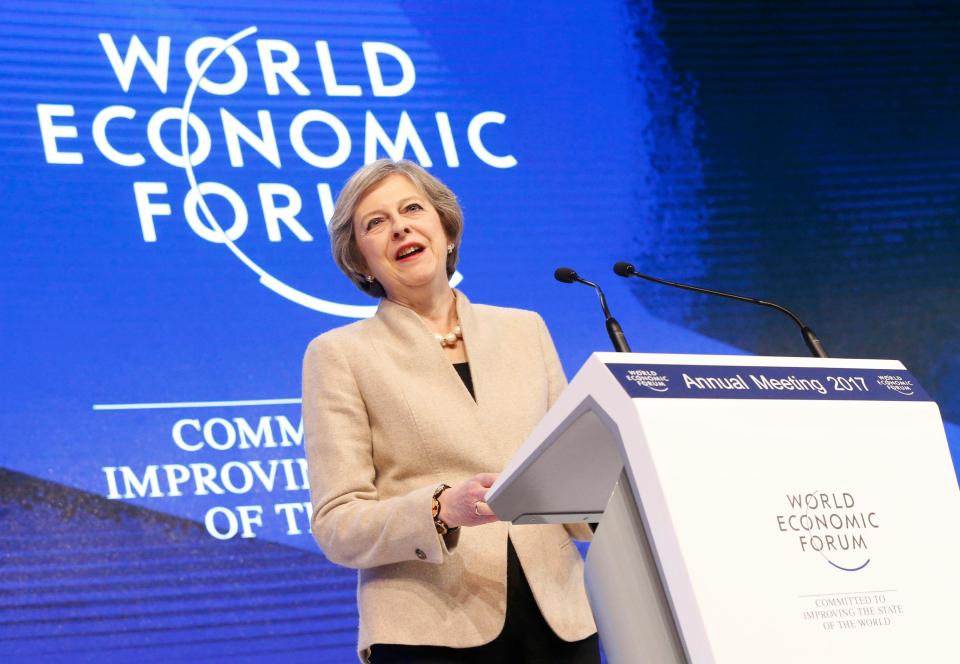 Theresa May's strong words are a shot in the arm for the public.

Against the backdrop of yet another chaotic and disastrous “relaunch” of Labour’s Calamity Corbyn, in which policies were invented on the hoof, promptly abandoned, and then picked up again, Prime Minister Theresa May has demonstrated great competence on the world stage in two absolutely solid political speeches.

One, of course, was Mrs May’s call to the world’s commercial and political elite in Davos at the World Economic Forum, in which she challenged those present to accept that globalism has its downsides. Whilst there is no doubt that overall the world has an “unprecedented level of wealth”, she argued, that wealth was so unfairly shared that even in the rich and developed West there are whole sections of society who feel that they are left out economically, who feel undervalued and resentful. In the less developed world, there are literally millions, if not billions who are yet to see the huge benefits that the markets can deliver if they operate fairly as well as freely.

Mrs May’s challenge is to all of us and should find a strong echo in readers of this column. “Talk of globalisation can make people fearful. For many it means their jobs outsourced and their wages undercut. It means having to sit back and watch their communities change around them. And in their minds, it means watching as those who prosper seem to play by a different set of rules, while for many life remains a struggle as they get by, but don’t necessarily get on.”

This was a blunt challenge to her audience, and a bold one for Mrs May. She clearly doesn’t lack political courage or conviction to warn the world’s billionaires and political leaders that taxes have to be paid fairly, that successful businesses have social responsibilities, and that in a just world wealth has to be spread. The challenge in these matters, of course, is to make sure we don’t kill the goose that lays the golden egg. In short, markets have to be sufficiently free that entrepreneurs and corporate entities want to invest, create jobs and earn profits in order that taxes can be paid; but not so unregulated that the global economy is a free for all with businesses acting like pirates.

Getting this balance right is easier said than done, but the United Kingdom is currently generating huge amounts of overseas investment as global businesses realise the real potential of our departure from the suffocating regulatory environment that is the European Union - £16 billion has already been pledged since the EU Referendum. Already, President Donald Trump has promised that Britain is in the front for the queue, not at the back as his predecessor President Obama threatened, for a free and fair trade deal that will benefit both the United Kingdom and the United States economies. Similar trade deals with countries all around the world are becoming likely and popular. China, India, Australia, New Zealand, Japan and Canada are all on the list.

And it was on the subject of Brexit that Theresa May gave her other speech, setting out the principles that will guide the negotiations with the other 27 Member State of the EU and making quite clear the objectives of the British Government under her Leadership.

Stamping the objectives with her full personal political authority, Mrs May left the world in no doubt, that Britain is leaving the Single Market and the European customs union. No compromise. No half in, half out. No associate membership. Out, means out. She also committed her Government, rightly or wrongly (and this column has consistently criticised the xenophobia that has infected British politics) that there would be real curbs on migration between the EU and the UK.

Her remarks, like those in Davos, were a direct challenge to the elite of Europe who had been threatening that Britain would be economically disadvantaged as a punishment for leaving the EU. Mrs May clearly and unequivocally stood up to that threat of bullying. “We do not seek to adopt a model already enjoyed by other countries. We do not seek to hold on to bits of membership as we leave. The United Kingdom is leaving the European Union. My job is to get the right deal for Britain as we do.”

Not since the days of Margaret Thatcher has there been such determination and steel in a British Prime Minister on the issue of Europe, and the EU’s leaders should take Mrs May seriously. She has grown immeasurably in stature since she took office and is clearly a force to be reckoned with.

The clarity and forceful conviction with which Mrs May set out her plans met with widespread support among her second audience, the people of the United Kingdom who had the courage to vote for Brexit six months ago, who have had a pledge that the Article 50 departure process will be triggered by the end of March, but who were unsure and nervous about the confidence and determination of the government in delivering a Brexit that works for Britain.

A YouGov poll conducted after the speech found that 55% of British people think the deal the Prime Minister will deliver will be good for the country. That compared to only 19% who think it would be bad. It is the latter figure that is truly astonishing, for that is so massively less than the 48% who voted against our departure from the EU. So, let the Remainer die-hards take note that their support is dwindling, their self-delusion is over. Britain and its people are on a one-way journey out of the door, and we’re not going back, whatever the Supreme Court’s meddling lawyers, or the unaccountable House of Lords, or even that spent political force, the Liberal Democrats think.

Business confidence is booming too. As the Chief Executive of the massive insurance and pensions firm Aviva recently said, “We see significant opportunities to differentiate our business in the UK post-Brexit. We like the UK, we’re investing in the UK, and we are growing in the UK.”

If Theresa May continues to steer the determined course she is so confidently plotting, this column is confident that whilst there may be choppy waters ahead, the economic future for the UK post Brexit is going to be a bright one.